Home/Know Your Locks
Previous Next 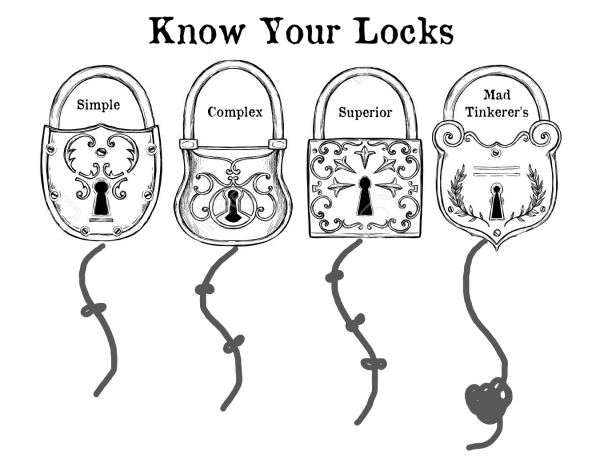 When you make a lock, you get 1 key, and both must be phys-repped. Both the key and the lock phys rep itself must be marked identically with your initials, color codes, numbers, or other methods of making them distinct. Additional keys for a particular lock may be made for 1 Tinkering Production/Dreg. It should be obvious, but all locked containers and doors need to have the appropriate knotted strings on them on the outside. Any that do not are simply unlocked. Note that strings may be tied as tightly as is possible (no glue or adhesives can be used, however). Containers/doors/etc. should be tied with the strings so they do not actually stop them from being opened out-of-play; a good place to tie them, instead, is on or under the lock phys-rep itself. Only nylon/poly shoestring, nylon or cotton cord, or paracord is allowed for locks; leather and rope is not acceptable. If you are in doubt as to the acceptability of what you want to use, just run it by us.

To pick a lock, a character must have the Devices ability at the appropriate level and use their tinker’s tools during the process of untying the phys rep. Strings may not be cut or broken in the process, and a player who is lockpicking must always have tools in hand while they are doing so, even if they work the “lock” with their fingers.

The level of a lock determines how difficult the object it locks is to force open using Feats of Strength. Every single feat used to break a lock must be delivered with a VERY loud 3 second count: “Feat of Strength: Breaking 1, Breaking 2, Breaking 3!” A Greater Feat of Strength counts as 3 basic FoS for the purposes of lock breaking, and a Heroic Feat counts as 3 Greater Feats. This relationship only goes one way, however: Basic Feats are useless on Complex or better locks, and Greater feats are useless on Superior or Mad Tinker’s Locks.

Any spell, combat maneuver, or special effect that delivers a Break effect counts as 1 Greater FoS for the purposes of forcing a locked container or door.

Locked containers/doors that are Heavy (see General Craft) add 3 to the number of whatever kind of feats are usually needed to break the lock. The Mysteries of Flame and Iron spell, Perfected Fortress, similarly adds 3 to the number of feats, and both these effects can stack. A Heavy door or chest with a Mad Tinker’s Lock installed and Perfected Fortress cast upon it takes a daunting 12 Heroic Feats of Strength to break. Expect that some locked doors or containers you find in ruins and other weird places may well be unforceable.

All Feats of Strength used in forcing a lock must be delivered within one minute to have an effect. If one minute passes and the object is still locked, the number of Feats needed resets. If a door or container is successfully forced, it is considered a Broken item and can be fixed with Basic/Intermediate/Advanced Repair as normal. Doors may not be mundanely locked or barricaded (as in, by using a real lock on cabin doors or by blocking their movement somehow).

About the Author: Fractured Larp