FIENDS OF THE FRACTURE

A collection of the more terrifying inhabitants of the Fracture.

The following information is considered to be widely known in some degree around the Fracture, thanks to the heroic efforts of many explorers. Thus anything below can be considered ‘in-play’…and future developments may reveal even more horrors. 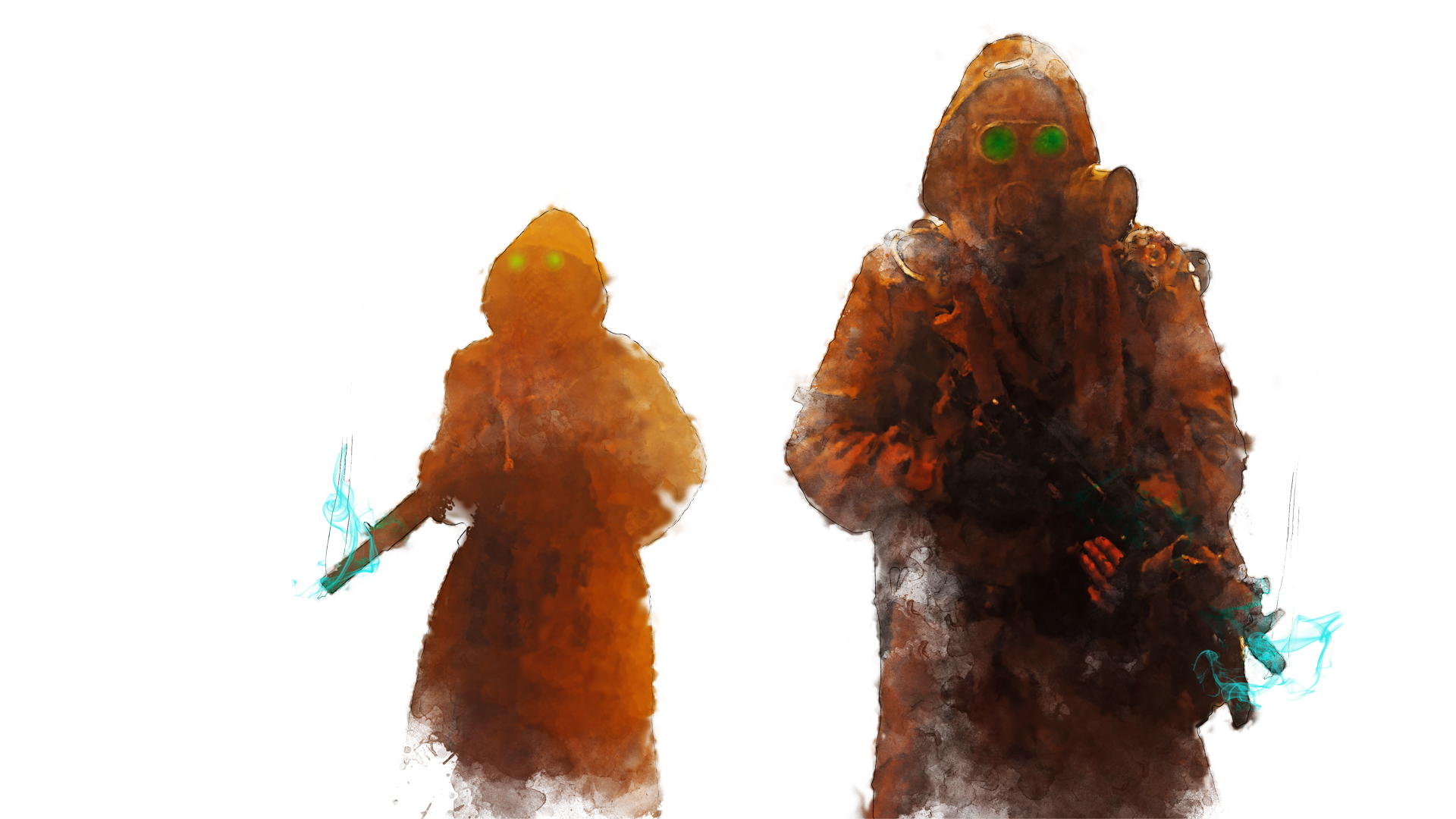 Alien in every aspect, these mysterious humanoids are relatively new to the Fracture, having only appeared within the last year. Some fringe settlements report that these beings are capable of speech, and are not outright hostile…at least initially. Wearing masks that cover their entire face and wielding strange railcasters that appear to shoot spiritual energy instead of physical shot, the few reports that exist all confirm that they are looking for something, or someone, in specific, ransacking caravans and settlements but taking nothing of value. What these hunters are actually looking for, only they seem to know. 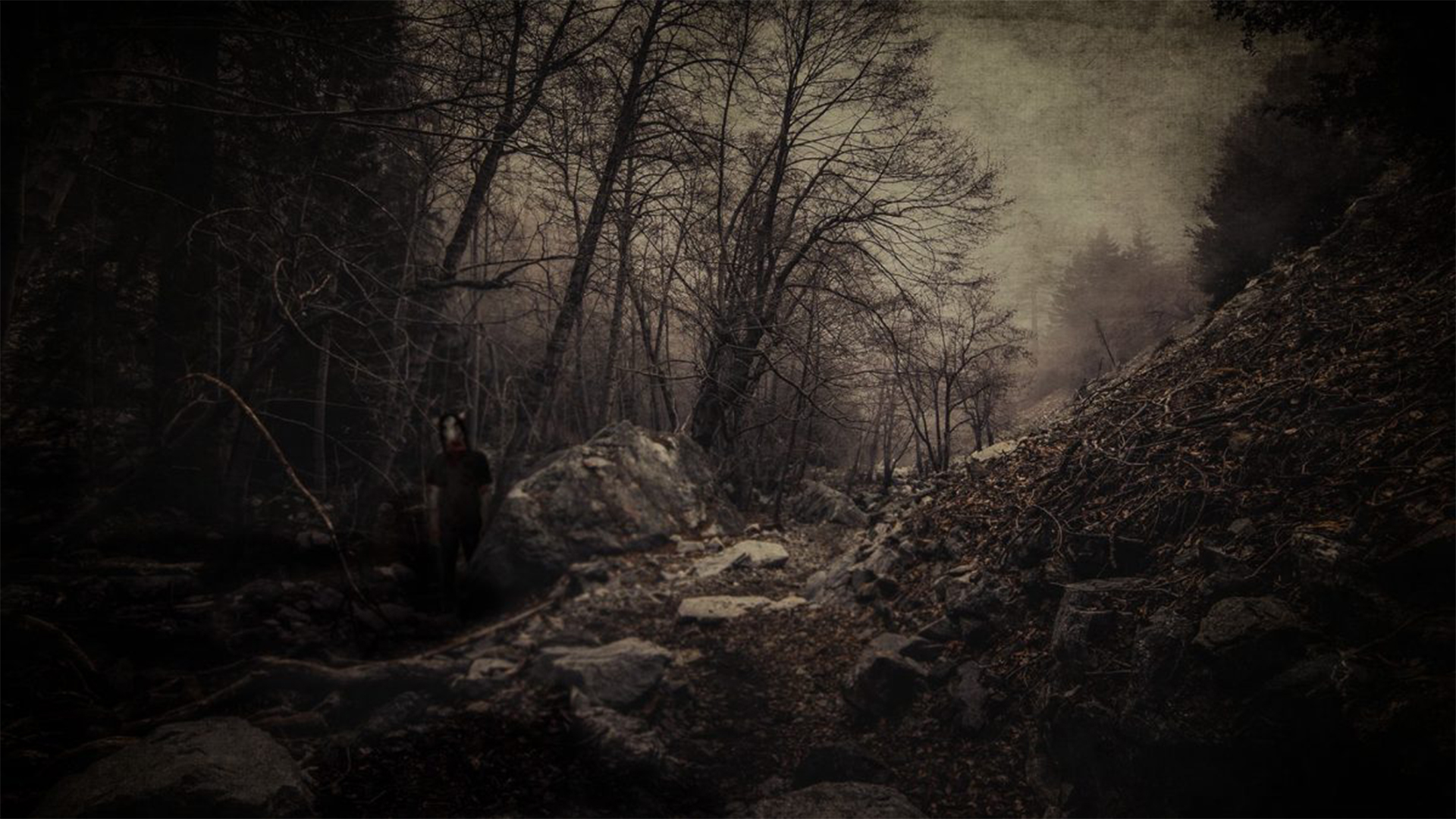 Very little is known about the creature called the Kess, and what is known seems to change with every new account. One thought to be another mindless predator of the Fracture, further research from the minds of the Scholar’s Guild of Haven have revealed that it is, in fact, likely the sole survivor of a now-dead shard world. The current hypothesis claims that it arrived to the Fracture through sheer will, hunting the thing that was responsible for the destruction of it’s home. These scholars claim that the Kess, though a being of violent vengeance, has a type of ‘code’ it will follow when hunting down its victims.

On a more practical level, the Kess is known to be territorial, often appearing to drive explorers away from certain areas with no apparent connection between them. Perhaps in time, some brave adventurers will be able to communicate with this shadowy creature; until then, many of the settlers on the outskirts live in fear of its sudden appearance.

While most of the flora and fauna originating from the World With No Shadow disappeared alongside their settlement and realm, the persistent Locust Mounds remain. Each is a shambling combination of vines, leaves, and corpses, dragging itself slowly in search of prey. While not outwardly dangerous themselves, they emit a type of parasitic spore that invades the mind and destroys any sense of reasoning and compassion. These spores gestate inside the minds of their crazed hosts, driving them to acts of fury and violence on all around them, including trusted friends and family. Once every person in the vicinity is either infected or dead, the Locust Mound consumes all of the remaining corpses and continues its slow hunt, now with a collection of fanatic killers to catch and tenderize its victims.

Most Locust Mounds, if attacked from a safe distance with fire, are easily destroyed. However, they have been observed as being able to withstand tremendously hostile environments, being one of the few creatures able to exist in the western areas known as the Grim Barrens, and showing no ill effects from exposure to the Rotplague. Some scouts have even reported massive Locust Mounds, consisting of several dozen tangled individual mounds, making their way towards their next meal with an unstoppable advance. 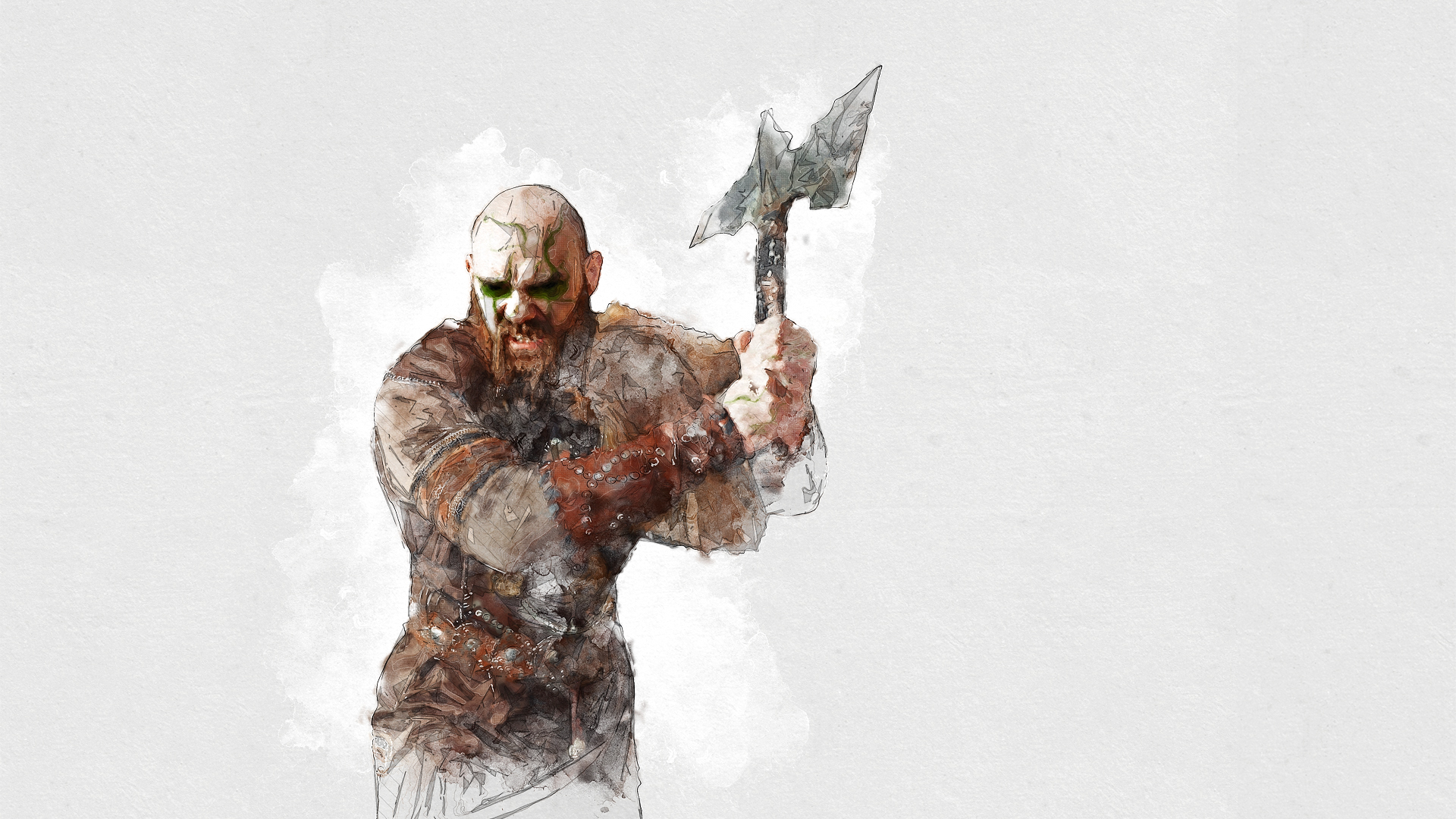 The Locust Mound, an aggressive plant creature hailing originally from the World With No Shadow, has a very unique feeding system. While it subsides entirely on carcasses, most animals are able to outpace it with a brisk walk, and the other scavengers of the Fracture are much quicker to pounce on fresh meat. However, some unwise creatures will attack the creeping plant, and in doing su inhale it’s toxic spores. Those scavengers eventually become the optimal feeding mechanism of the Mound, in a horrifying process that can escalate into swarms of mindless drones, constantly killing fresh prey for their mother plant.

The spores extruded from a Locust Mound can travel up to twenty feet from the plant itself, helping it to catch unaware hosts who simply try to avoid the strange, putrid smelling plant. These spores, when ingested by smaller animals, lead to the host’s death in a matter of minutes. However, larger creatures, including most of the sentient races of the Fracture, undergo a maddening transformation. Driven into a blind rage by the sudden toxicity in their brains, humanoid creatures will fall upon each other in acts of unwavering violence. This bloodshed only ceases in two ways; either the host is rendered medical aid or manages to expel the toxins naturally, or, the only remaining living creatures in the vicinity are the Mound and the infected. In some cases, these Locust Warriors number in the dozens, shambling ahead of their parent plant until they find new prey to butcher, or they fall victim to the increasing poison in their veins. Either way, the Locust Mound has a steady supply of food. 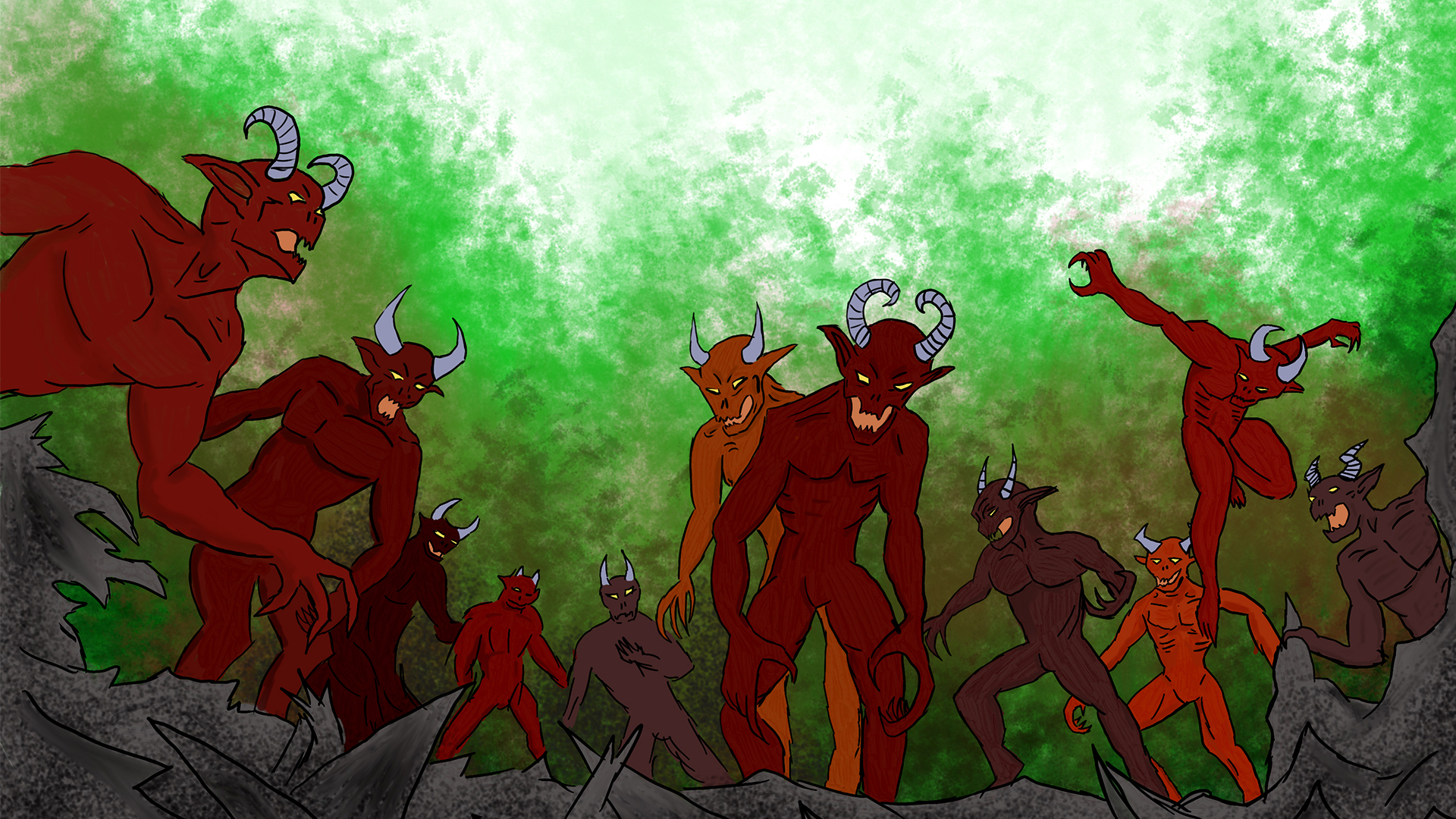 Twisted, malicious spawn of the Burning Pit, Pitborne Imps are spite given form. Though they are individually weak and easily dispatched, they often travel in large swarms, overwhelming travelers with a flurry of hurled chunks of burning pitch. A Pitborne Imp is driven only by the need to cause chaos and destruction, preferring to harry and torture prey instead of simply killing it. Though they lack anything close to real intelligence, they are capable of understanding and mimicking basic phrases…and often delight in repeating their victim’s final words again and again.

Interestingly, though they originate from the Pit, several variations of the Pitborne Imp have been recorded in areas of the Fracture with more than simple infernal influence. In one example, they had taken on elements of the magic of the Blighted Fen, suggesting that their spawning draws from surrounding magic. Some scholars theorize that Imps are less a race of creatures, and more a byproduct of twisted metaphysics, and could thus be ‘influenced’ with proper preparation into multiple varieties. These theories are, of course, easily dispelled, as no one could possibly see a value in breeding these creatures for any sort of purpose. 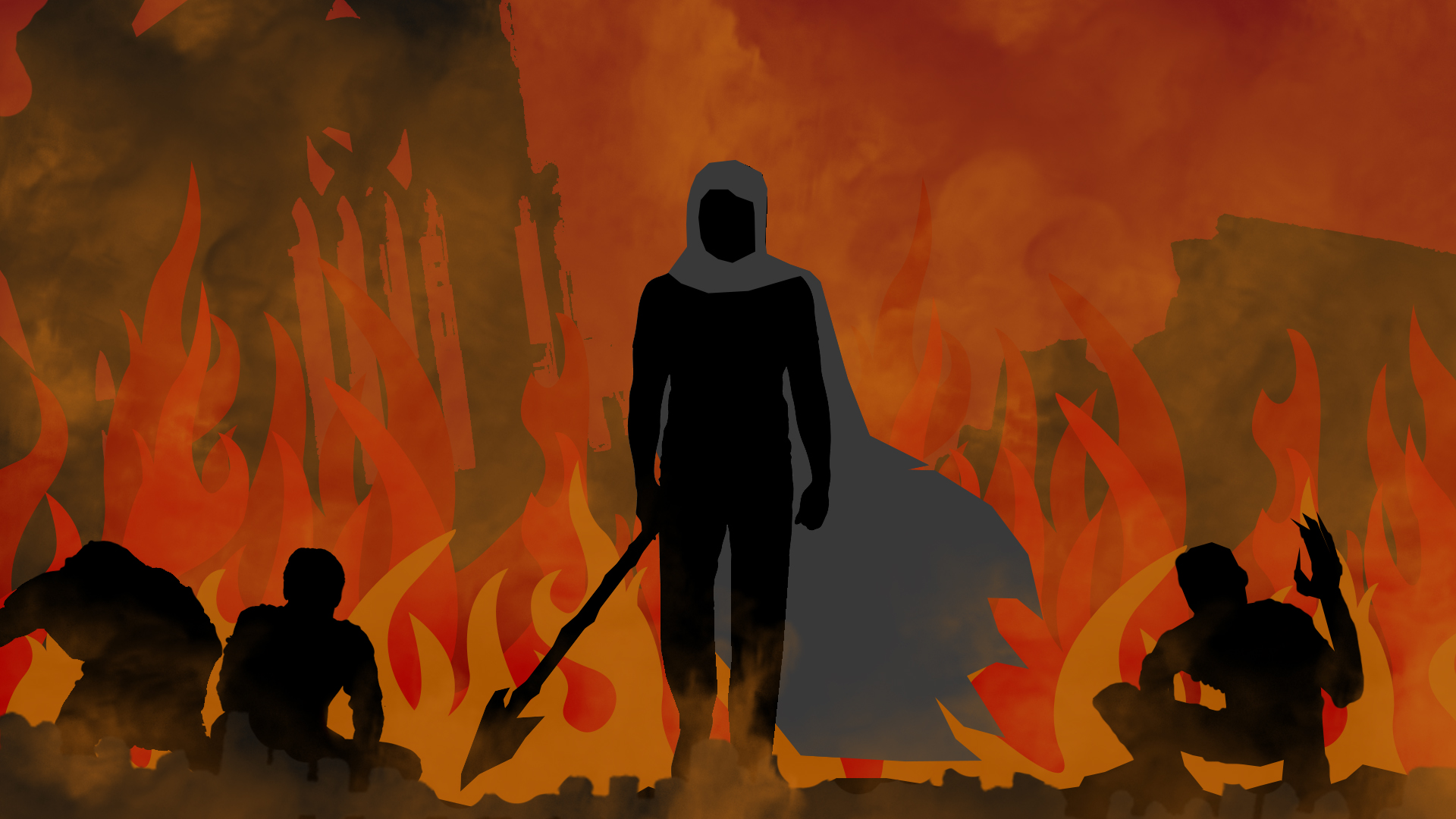 THE SHRIE AND THE GHULS

Not much is known of the history of this subterranean race, as all attempts to contact them are met with abject hostility. What is known is that the leaders of this group, the mysterious Grey Cloaks, lead packs of feral humanoids to the surface at night, striking from hidden passages and forgotten caves. Some dark rumors insist that these mutant abominations, referred to as Ghuls, are actually the malformed children of the Grey Cloaks; a twisted punishment for whatever atrocities condemned them to the dark underground of the Fracture.

These raids are not for supplies, but for live captures, and many an outpost has simply gone silent in their wake, with only smeared blood and broken doors to speak of their horror. With little understanding of what these creatures are, or even why they suddenly appeared after years of lying dormant, most settlers speak of the threat of the Shrie in hushed whispers. 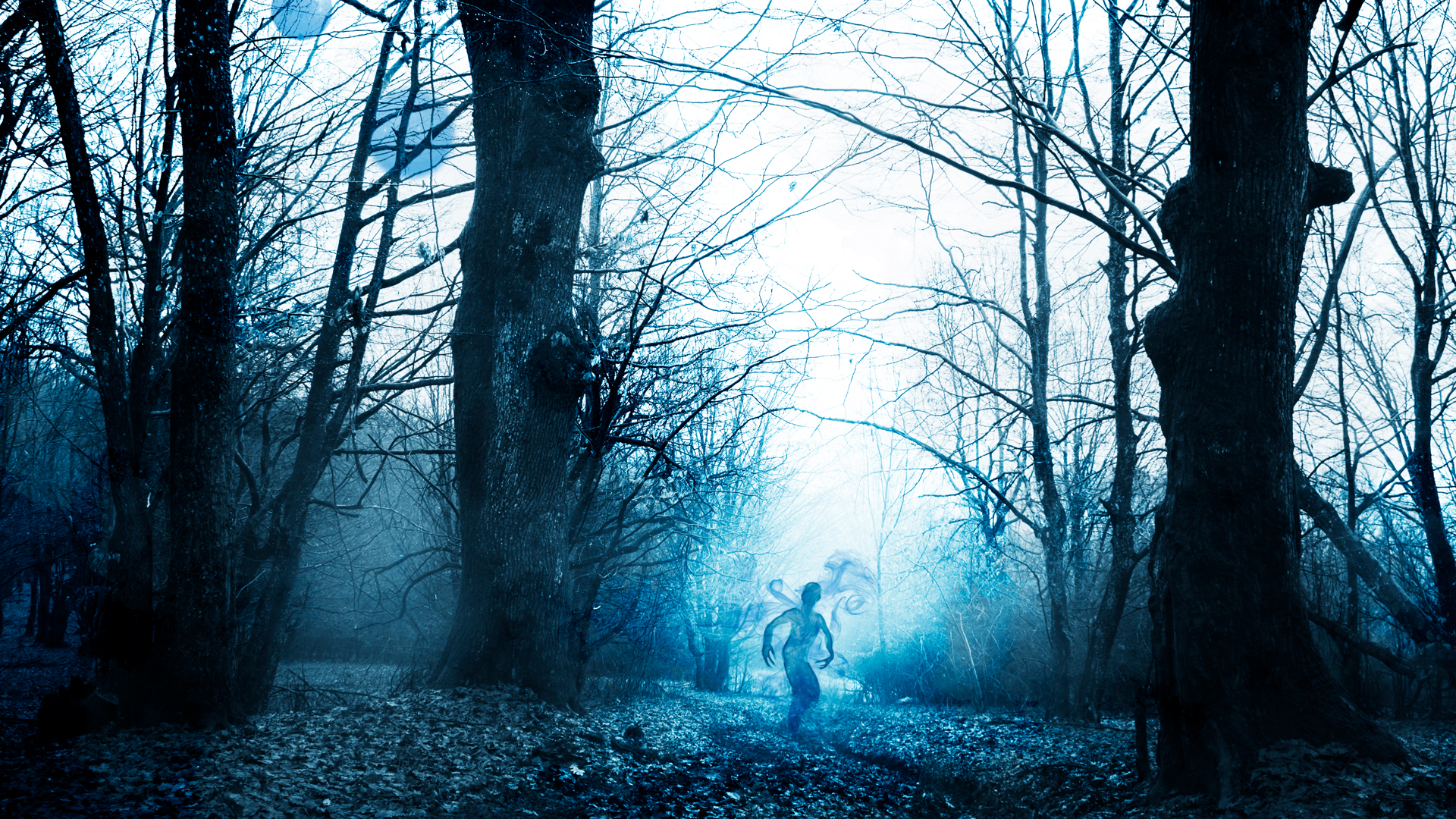 Originally thought to be native to the Dominancy, the truth behind the monsters known as Vile Shadows is far more sinister. Recent information has revealed that these parasites have infected dozens of worlds, dating back to the original Cataclysm that saw the Celestials nearly destroyed. Why they found such strong purchase in the Dominancy is a truth that has been hidden from many scholars, but one fact is certain; they are nothing but evil given corporeal form.

The methods of a Vile Shadow vary, but all are horrific. Some seem to prefer to mimic the voices of allies from just out of sight, luring unwary (or overly heroic) adventurers to a dark end. Others create ‘treasure’ piles consisting of items they’ve looted off of former victims, enticing those greedy enough to step beyond the light into an early grave. Though they are physically weak, their barbed words and whispers can drive even the most willful warrior into a blind fury, and at worst, drive them to betray their former allies. Whatever their means of attack, Vile Shadows seemingly exist only to cause harm, attacking at random and with no obvious purpose. Thankfully, Vile Shadows are known to shun bright lights, and magic that has a more devastating effect on the accursed seems effective, though the beings themselves exhibit more spiritual traits than the undead. If is for this reason many Green Sash escorts carry a ready supply of phosphors, and the practitioners of the Forgotten Rites are in high value for caravans exploring shadowy lands.

Many attempts have been made to capture a ‘living’ Shadow by the Adventurer’s Guild of Haven, but so far, none have been successful. Even magical wards and greater workings seem ineffective at containing, or restraining, the monsters for very long. As many Dominancy scholars have hypothesized, whatever magic maintains the emerald dome around their city may be the only force that Vile Shadows are unable to penetrate, but recreation of that ward has been so far impossible. There are rumors, though, of a spell known only to faculty of the AERF that can bind a Vile Shadow to the sorcerer’s will; the AERF officially rejects and denies all claims to this nature. 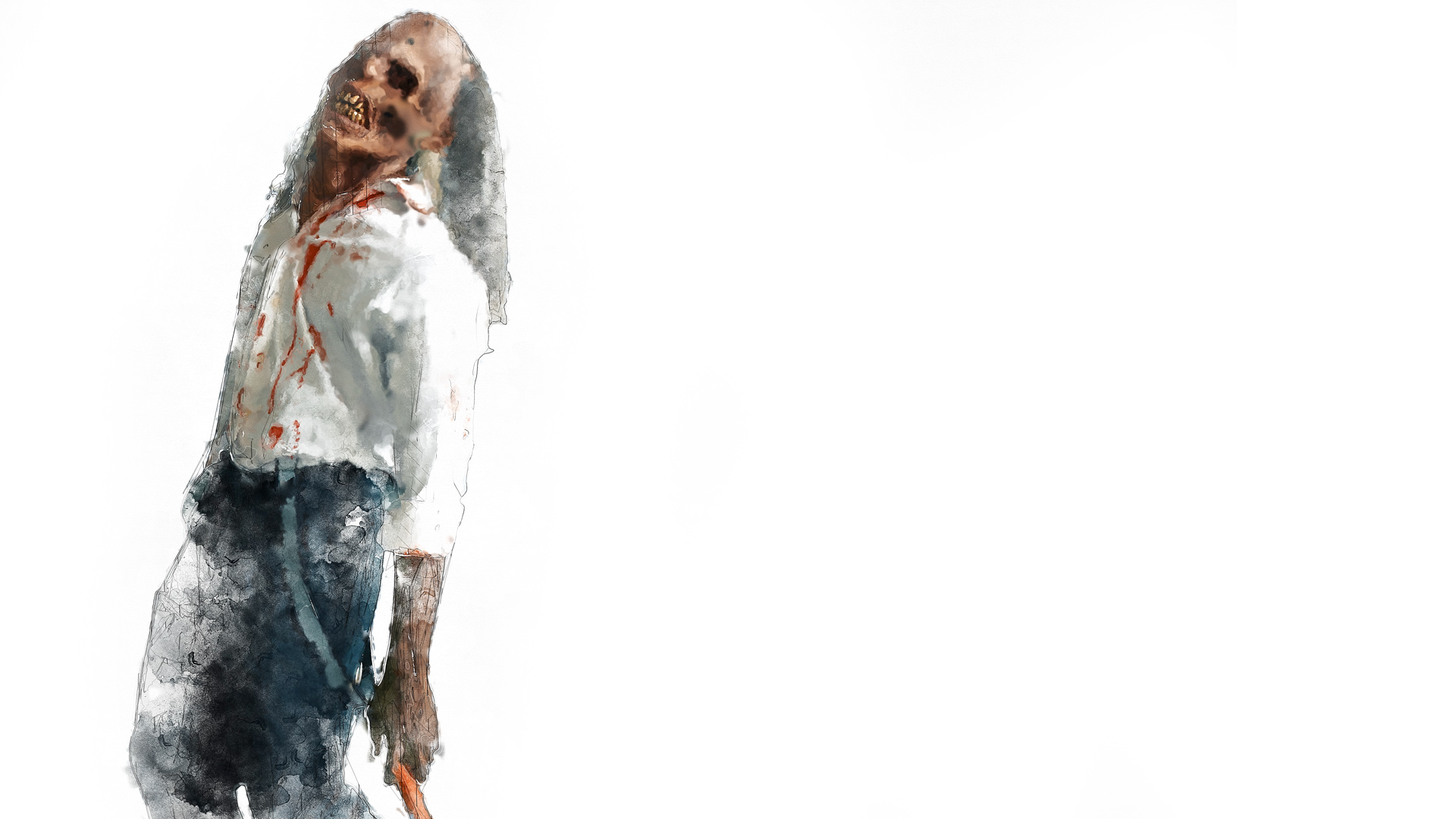 Despite the wide variety of worlds tethered to the Fracture, some themes appear strongly consistent. One of these, if not the most common, is of the dead rising to attack the living. These accursed beings are as varied as the worlds they hail from; the vicious Zombie of the Four Monarchies, the nearly unstoppable Cryptborne of Exile, and the bloated Drowned Men may appear physically different, but scholars agree that similarities exist across each example.

Almost as varied as the types of zombie are the ways in which one is created. The hunters of the Red Frontier claim that the dead are created by shards of broken weapons, left over from when the gods of death and life warred for supremacy. Those hailing from the Winedark Seas speak of the Drowned, the risen protectors of a dark goddess who they say stalks the depths of the Fracture even now. Reports from abandoned facilities in the north tell of undead being assembled by hand, their rotten bones reinforced with steel. Whatever the means of rebirth, the undead are almost universally hostile to the living. Thankfully for the denizens of the Fracture, many cultures have created effective ways to stop the risen corpses, from magic spells and wards to specially built weapons that ensure the relatively slow creatures. While a single zombie might not present a challenge to a skilled warrior, a few dozen can easily overwhelm defenses with sheer, unrelenting force. The dead do not need food, rest, or even breath, and as such they march eternally on against those that still live.