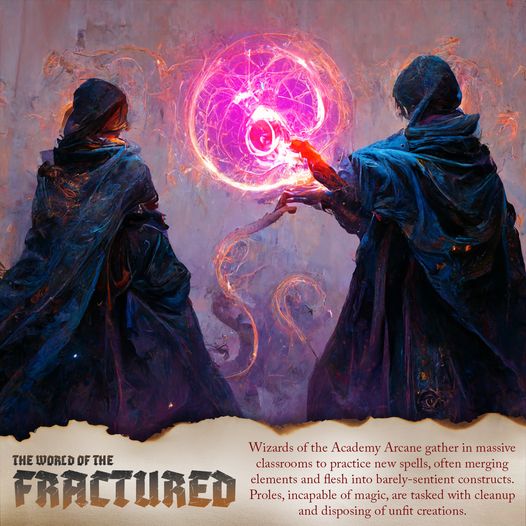 Floating in the vast sea of endless nothingness lies a single alabaster tower, dimly twilit by the soft glow of the void. This tower is of a sort that one would expect to be inhabited by a wizard, and in this our instincts are keen, for it is home to thousands of wizards (and a number of magic-illiterate Proles as well). The tower contains much more space than it would seem from the outside, but this says nothing because the its base is what we would describe as “two-city-blocks” wide and long. It has 333 floors, but the 13th and the 77th floors sometimes disappear and are regarded as highly mysterious consequently. The structure is pentagonal in shape with each “corner” representing one of the classic five elements (Air, Earth, Fire, Water, and the Sublime).

This is the Academy Arcane, a civilization, university, and mystic order rolled into a single world-wide institution. Organization of this micro-society falls along academic lines, with Deans overseeing the tutelage of various Faculty who in turn minister to Students. There are five Deans who oversee three colleges (Liberal Arts, Material Arts, Sorcerous Arts) or bureaucratic functions (Dean of Students, Chairman of the Dean’s Council). The Faculty are ageless wizards, jockeying amongst one another for tenure status or overseeing various secret societies. Students are essentially ageless, which is merciful, because they want to become Faculty; there are just never openings. Murder would seem a viable option, except that all the wizards of the Academy, Student and Faculty alike, are cloaked in spells of protection that dispense instant justice at the slightest hint of violence.

Proles serve in tasks that are too menial for the wizards to bother magicking away. The term ‘Prole’ is short for proletariat or underclass. One is not a Prole because they do not know magic, but rather, that they have been determined to be incapable of it. Proles can be attuned to the ways of magic or study Occult matters just like anyone, but they cannot initiate into the School of Sorcery called the Degrees of the Elements. There are other Schools of Sorcery, but the Academy no longer knows how to initiate people into them.

Death by natural causes is often spoken of, but is rare enough so as to function much like a rumor or untested hypothesis. Social mobility is unheard of and notions of “Publish or Perish” are often taken in quite a literal context. There is no graduation; Students are Students unless there is a vacancy in the Faculty, and there are never vacancies in the Faculty. Because mystical occurrences are part of daily life, Students often have hobbies like dream interpretation, spell dueling, and artifact-maintaining. For the more ruthless at heart, secret societies make shadow war upon one another as a means of passing the time. One society maintains the wards of indestructibility on the Academy’s bricks while another defaces them. Yet another keeps the lamps oiled while some other anonymous group adds a chymical which turns the flame an eerie-green and blue.

Students spend their days taking classes and doing university assigned tasks. Students are graded on classes but there is essentially no penalty for failing a class except that you’ll have to take it again next semester. You can spend time away from class by applying for Sabbatical. You can theoretically extend your Sabbatical indefinitely once granted, except that in order to renew it you must face a magical beast (Dean of Students’ choice) in mortal combat.

The Deans (who have forgotten more spells than most wizards ever learn) have discovered a new world, known as the Eudaemonosphere (“Place of Good Essence” in the Old Tongue) which is accessible through powerful rituals known only to the Deans. These rituals can transport hundreds of Students at once for a field trip of sorts. Indeed, it is prophesied that the Academy Arcane will one day come to rest in this Eudaemonosphere. Therefore, students can expect to find their way back into the Academy Arcane with a wealth of knowledge about the new resting place for the Academy.

Virtually nothing is known of this new world, but this is precisely what makes travel there so exciting! For many, it is a chance to learn new magic that could allow one to join the Faculty. Dream-readings predict that the world will have many Schools of Sorcery present that could be learned by an intrepid wizard. Best of all, the Faculty can’t afford to miss class so they won’t be the ones getting the glory. Students are trading meal cards amongst another for adventuring gear, knowing that their fame will be made in the world beyond.

Magic School: Degrees of the Elements

The traditional, native magic of the Academy is known as the Degrees of the Elements. It draws upon the classical notion of the four elements (air, earth, fire, water) and upon the abstract principles of magic itself. Stylistically, it provides a number of utility abilities and protective workings. It conjures ritual circles that empower the very use of magic itself. It reflects offensive spells back its caster. It even steals the techniques of other schools of sorcery for a brief time. Its rituals are based on meditations upon the four elements, representing abstractions, and interfacing with the material world.

Unlike other magical schools, the spells from The Degrees of the Elements have some restrictions on when you can pick certain spells. That is, in order to pick up the Major Degrees of Fire, you have to have the Minor Degrees of fire. In order to pick up the Sublime Degree of Fire, you have to have the Major Degrees. This restriction only applies to individual elements within the school. Rituals are not restricted in any way, and there is no such thing as an “Air” or “Fire” charge; a DotE charge, regardless of the ritual that generated it, can be used for any of the spells in the school that you know.

Every single spell from this school must be cast with a Wand designated for the appropriate element: white or transparent for Air, red or orange for Fire, blue or aqua for Water, brown or black for Earth. A wand’s color defines its element, and a wand may not be used to cast spells outside of its element. Wands are tagged, in game items with a value: they are made with Jewelcraft (specialty 1) and cost 3 production. Wands must be from 6-12″, and are treated basically as props: that is, under no circumstances can they be used in combat directly in any way. Wands can be broken just as any held item, and are repaired in just the same way, though obviously they cannot be the target of Weapon Break maneuvers. Wands are not inherently magical.

Packet color for the Degrees of the Elements is gray.

The Academy Arcane is a very whimsical setting, but not without its share of thorns. Each Wizard is a sort of mythology unto themselves, with their own style of the Degrees of the Elements. Wizards are intended to be bumbling, magical people from a forgetful, dusty world. Proles are the forgotten mundane people of the world: an underclass. Proles can learn magic in game just like any character, but cannot begin game with it as a deliberate player choice. Characters portraying Wizards out on Field Trip can expect things like occasional quizzes, lectures, and other “academic” challenges, all of which they can reasonably ignore in the face of more pressing concerns (like monsters and other manner of awfulness).

Read More About the Academy Arcane
Magic: The Degrees of the Elements
Go to Top