Abyss of the Lost 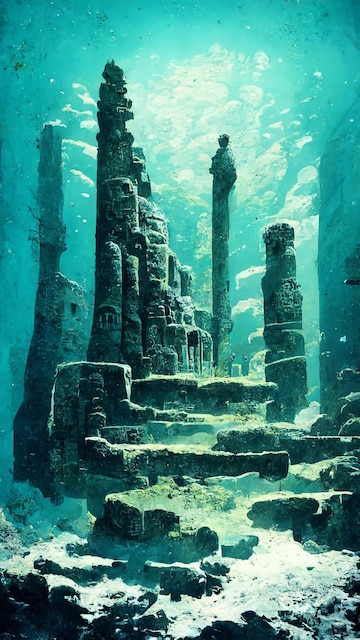 The Abyss of the Lost is an endless sea, without border or boundary. Although there is a surface, little of note mars the stillness of the ice-cold meniscus. The hushed waters reflect the deepest nights and starry skies infinitely. The air itself is dank, grimey, and reeking of disease; and a fine blue mist covers any isolated floating island or object, isolating them from living memory. This environment does not lend itself well to any sort of surface travel. Day is lit from above by a blue sun that barely heats the water, and provides very little in the way of light. When the sun slowly disappears beneath the smooth horizon, greeting its reflection as an identical brother, the stars shine down, each one as bright as the moons that adorn most worlds. Thus, the Abyss is perpetually lit by twilight. Nothing lives in the fouled air beyond the Mist and nothing disturbs the endless glassy surface of the sea. The world itself is contained beneath, submerged in the darkest depths of the ocean.

It is here, just inside the Great Trench that civilization remains. This is the realm of the Rakshasa, wary beings who govern the decaying ocean. Able to survive below the waters, the Rakshasa live in floating cities which dwell within the Trench. The lives of the Rakshasa are governed by what remains of this ecosystem, and thus their way of life is dominated by it. There are no seasons here as in other worlds, nor can “daytime” and “nighttime” be distinguished this far below the surface with the naked eye. Time itself is extremely linear, and difficult to record. Rakshasa measure their life-span in terms of Resurgences in the Abyss, which grows shorter with each passing generation. A Rakshasa may live up to 30 “years” before their first reconstitution by the sea floor. But with each passing Resurgence, they grow more and more unsettled. All Rakshasa subconsciously seek the void of nothingness. Once this Pramadya takes hold, it festers in the mind like an unwelcome addiction, driving the Rakshasa into complete and utter madness until their final breath. At this time they simply cease to exist; their bodies dissolving into seafoam as they are taken wholly by the Sunyé, the Call of the Void.

The Rakshasa are not the only sentient beings who inhabit the Abyss of the Lost. In this world, every creature and object, including the water itself, contains a spirit. These spirits are physical objects that have been transformed into self-aware beings. Although such spirits lack a physical presence and cannot touch or manipulate things in the world directly, they have power over the things they descend from, and can control things within their unique sphere of influence. The Rakshasa understand that most of these newly born spirits are powerful and angry, seeking vengeance or restitution. Consumed by their own Pramadya, these spirits are highly destructive and must be controlled or destroyed by the Rakshasa. Spirits of Water and are the most common spirits, although the spirits of sea life and objects lost or destroyed in the Abyss are also quite common. It is because of these spirits that the Rakshasa govern their lives as they do: birth, survival, endurance, and finally oblivion.

The Torpor calls upon the six planes of the Heavens and the six planes of the Underworlds within the Abyss, the physical realm obviously lying between the two.  Practitioners innately feel a closeness to the Sunyé, and are more aware of the call of the Pramadya.  As such, each spell reflects a different value of Pramadya; where a fully mastered practitioner of the school will have a balance of zero.  This value directly reflects the call of the Pramadya to the individual Caster, of which the effects are FOIP.  While practitioners would be advised by their seniors to remain closer to zero, this is not required, and entirely up to the player.

The largest informal network of occultists and practitioners of this school call themselves the Vidyadhara.  They practice a form of magic known as the Torpor of the Unfathomable Void.  There is no formal process of joining the Vidyadhara, nor are there any specific practices that differ radically from the mainstream of Rakshasa society.  Unlike the Garuda School, they do not conceal their identities, and often work in the open to hunt and control the angered spirits that ravage cities and outposts.  The Vidyadhara do however have a much stronger scholarly bent to their lives than their compatriots, and are often sought for council.

Not all practitioners may be Vidyadhara.  Denizens that have unraveled the mysteries of the Torpor of the Unfathomable Void have inadvertently taken up the mantle of being tied to the constant flow of never ending Pramadya.  Watching the ebb and flow recede further and further, Casters of the Torpor of the Unfathomable Void undertake their own journey of inner reflection.  Whether seeking answers or seeking nothingness, the call of the Void, known as Sunyé, only grows stronger.  Negative Karmic actions and spells intensifies this call.  Denizens of the Abyss of the Lost are neither feared nor revered for these abilities.  Rather, this is a tool that points to the inner reflection and truth of the Rakshasa; how close are they to falling into complete darkness and decay? How long until their anger becomes uncontrollable?

Packet color for the Torpor of the Unfathomable Void spells is royal blue.

Players portraying Rakshasa must wear streaks of purple and silver makeup, in a chaotic tribal fashion or woad. The closer into the Void they go, the purple streaks will darken to black. Rakshasa breathe both air and water and seem perfectly adapted on the land as they do in the sea.

Rakshasa from the Abyss of the Lost are not accursed beings in anything other than a thematic sense. They have a difficult time surviving in the streets with words alone, and often resort to blades. The polearm is the weapon of choice: versatile, defensive, and deadly when needed. As such, Rakshasa receive the first level of Polearm for 5 character points. Advanced practitioners can hone their skills to eventually join the others among the Urvashim School or Garuda School by learning their respective style.

Rakshasa need no external means of resurrection once destroyed. Their soul remakes their physical manifestation with some measure of speed, but it reduces them spiritually.

Though much of the world is decayed, resources are increasingly scarce. Rakshasa who can successfully negotiate and haggle have an edge on their brethren for ensuring personal survival. Rakshasa receive the first level of Mercantile for 5 character points.

Rakshasa who show promise and skill in the Torpor of the Unfathomable Void can learn this Magic for 10 character points, instead of 15.

Rakshasa who wish to join the Urvashim School of the Thousand Perfected Combat Actions or the Garuda School of Barbed Talons can learn these Advanced Fighting Styles at a 5 CP discount for Level 1.

Read More about the Abyss of the Lost
Magic: Torpor of the Unfathomable Void
Go to Top