History of the Fracture 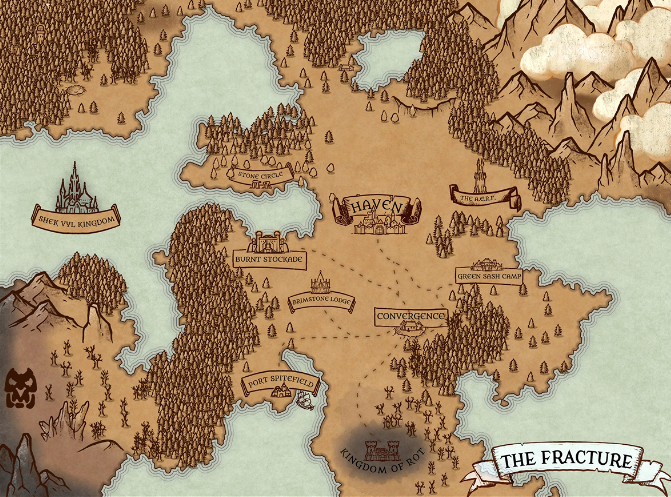 You’re not the only ones out there. The Fracture is populated with settlements and civilizations ranging from the technologically advanced submerged kingdom of the Sahagin to the wild, untamed Protohuman Grove. In the spaces between, creatures of all shapes and sizes prowl, searching for their next meal, be it beast or man. To pull back the scope is to witness the four Realms that create the space of the Fracture, but be warned: glancing into the dark nothing beyond those borders is truly maddening to all but the most willful world striders.

This section contains lore about the history and topography of the Fracture. While new characters are assumed to know none of this, the information collected here can be considered part of the ‘general knowledge’ that a character gains upon living in the Fracture for more than a few weeks.

The Celestials and the Fracture

Originating from a civilization almost as old as reality itself, the beings known as Celestials were, at one time, the caretakers and shapers of the multiverse. Beings of immense power, intellect, and dedication, they cultivated entire realities, maintaining a complex network of interconnecting planes. Though they appeared in extreme rarity to the beings of these realities, preferring instead to let other civilizations act as extensions of their will, their influence could be found in every world. Over millions of lifetimes, they acted as the removed curators of reality, subtly guiding entire planes of existence in directions of peaceful growth.

An unimaginable Cataclysm, the details of which are lost to time, reduced the Celestials to a handful of survivors. These remaining few receded into the shadows of a pocket dimension in order to heal and recover. For thousands of years, they waited, as the worlds and realities grew and expanded under its own established protocols. At the time of their return to the multiverse, there were but three Celestials left.

As they returned, they found a multiverse that had evolved past their original plans, deviating and changing under their own volition for centuries. Peaceful worlds had become violent, worlds fueled by arcane energies had seen it stripped away, and once small realms now threatened to encompass entire regions. Even worse, new threats had arisen: massive, maddening creatures from the deepest regions of the space between worlds, consuming and destroying with a mindless hunger. Seeing these threats, the youngest of the Three shed his name and took on the mantle of The Guardian, a protector of the stability of the multiverse. With mighty mace and cutting sword, he began to battle back the darkness. Though aided by the other two, he found that even their combined power was not enough to cleanse the horrors of the in-between-space, only ward them away.

The second Celestial, seeing that the entropy of the multiverse was always a step away, shed her original name and became The Mother. Drawing forth the unspent, latent energy of centuries, she began to craft a focal point for a new multiverse, a point of Origin that would replace the existing structure. She drew power from hundreds of worlds, breaking them down into their purest form of energy and shaping them into a perfect sphere. Though she was the most powerful of the Three, even she was drained by this creation.

Seeing that this life would need to be guided and cultivated, the third Celestial shed his original name and became The Gardener. Fusing his energies with that of the Origin, he began to walk it’s barren surface, tending to any malignant energies that had crept past the Guardian. Through his travels, he realized that the Origin lacked many of the pieces necessary to fully form a new multiverse; pieces that had been spread throughout the other worlds. Working to aid The Mother, he and The Guardian identified the missing pieces and the planes they existed in, lining them up properly for a grand World Machine. The Mother, sensing these pieces aligned, opened her arms, and the Origin began to slowly absorb the first of the realities. Though displaced, the first ensouled beings to arrive at the Origin found a paradise, free of violence and strife. Though the Celestials knew these beings would eventually meet their end as the multiverse was reborn, they had compassion, wishing them to live in peace until the end.

However, this would not always be the case. Even in their most desperate efforts, a sliver of corruption grew within the Origin. A final act of a petty and rebellious god, a great shadow took control of the Origin over hundreds of years, seeping its psionic tentacles into the minds of the caretakers. Eventually, the darkness wrapped around the Origin as a snake smothers its prey.

This act changed the Origin. Where once it was a glowing, perfect pearl in the cosmos, it was now fractured along it’s pristine surface. The Origin was altered fundamentally as well, as the corruption took hold deeply, mutating it’s feeding mechanism into something far more sinister. Whereas the original structure was one of peace and paradise, established as a final haven before a glorious rebirth, the new structure was one of malice and torture. No longer able to absorb the positive energy, the Origin developed a way to devour the negative.

The corruption spread to the Celestials, as their beings were unavoidably linked to the Origin. The Guardian was the least changed, as his efforts to protect the multiverse were still needed, even as the Origin threatened to consume it. The Gardener, retaining a small amount of his compassion, managed to alter the feeding slightly enough that simple slaughter and death would not provide nearly as much energy as lasting strife. The Mother, the most tied to the Origin, receded into darkness, unheard by her two Brothers for centuries. She would return, they knew, when the Origin was complete, and the new multiverse was ready to be born.