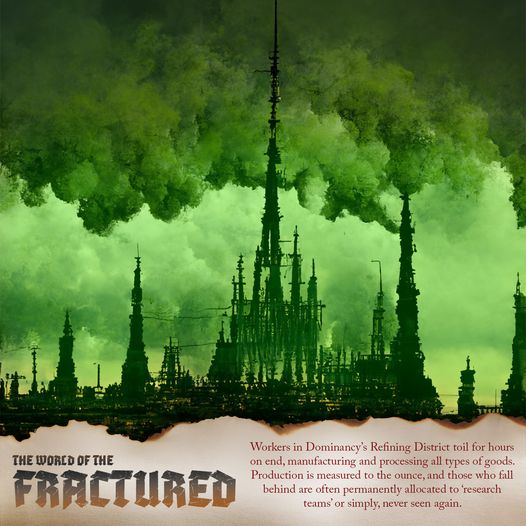 Near a vast blue ocean, a city of black iron and twisted spires sits under a faintly glowing dome of green. This is Dominancy, where the last vestiges of Humanity live in servitude to their masters; creatures from the darkest corners of the continent. Servitude is preferable, however, to the threat beyond the magical barriers. At the edge of sight, dark shadows dance with corpses, twisting vision and minds alike. For those who live inside the walls, one truth rings clear: only the Beasts can save you.

The Nightmare Dominancy is a world where the few remaining humans have come under the rule of oppressive monsters, after centuries of fleeing the darkness of what lies in the everlasting twilight hours of the Beneath and the Beyond.  The Beasts of this city, true monsters to behold, offer protection to the humans of Dominancy in return for unwavering servitude. Even then, the threat of being devoured, disemboweled, or strung up on a steeple at a whim looms over every human.  Or worse.  Only a select few “favourites,” known as Quislings, ever make it to any position of relative comfort; and even they still glance over their shoulders on foggy nights.

The city itself, massive and sprawling as far as the eye can see, is enclosed on land by a great stone and split into six districts, ruled by six great monsters known as the Beasts. Through a binding pact established long ago, each Beast is a pillar to the magical barrier protecting Dominancy, inviting the monstrous races inside, and providing  safety from the horrors beyond for humans. Thus each Beast rules over their human population with supreme power. Their domain extends over any living (and sometimes, that trait is difficult to verify) creature. Each district of the city is unique and relatively insular.  Though citizens of Dominancy can travel between the districts freely, their occupations, lack of transportation, and general superstitions tend to discourage them from leaving their home district. Most districts also share a similar architectural design, favouring slim stone buildings with intricate accents of black metal, high-arched windows, and dark tile roofs sporting small angled chimneys; thick smoke spouting into the sky from various workhouses. Very little vegetation grows between the densely laid cobblestone streets, as everything but wispy, slender grass and weeds dies in the thick, smoky air.  Towards the outskirts of the heart of the city, the skyline transforms abruptly to the thick gnarled trees of the Untamed Woods and the moors of the Farmlands Districts.

Life for the humans in Dominancy mostly consists of working in either a trade skill or menial labour, with only occasional rest. Humans are expected to bend the knee and present absolute fealty, given tasks as befits the Beast they serve.  Most humans live as simple peasants, fearing for their lives, and seeking comfort within their chuckaboos and large extended families. Though they are compensated for their devotion in “protection” and the most basic allowances; there are no dreams of riches or retirement for humans.  Simply being kept fed and clothed exhausts most of the light in their eyes. Those humans that do push past the poverty line tend to be the Quislings, preying off of the rest of their race in order to squeeze out as much comfort and coin as possible. Quislings have only slightly extended means, and are deeply loyal to the command and will of the Beasts, but not removed from human ranks. Other than Quislings, merchants, performers, and exceptional crafters may live to one day see real coinage in their hands, though heretics whispered about in taverns may come across these as well. To the working underclass though, the Quislings are just as tyrannical as their fanged and winged overseers.

While education falls far below trade skills and basic survival, some humans, especially those working in the Athenaeum, pride themselves in being useful in uncovering lost knowledge. The ordinary human, however, is more concerned with keeping their head down and doing their job more so than any intellectual pursuit.  As such, very little progressive or technological development comes from the human race directly. This has led to the popular and widely accepted belief that the Beasts are the sole inventors of our modern world, and that limb and life lost for that minute progress are but a small price to pay. They are worth only what a Beast sees them as.

For those who unfortunately live near the borders of the magical barrier where the smog is thinnest and the city less dense, few dare to wander close or look up past the wall for much longer than a glimpse. Curiosity and temptation stir. Visions of horrific nightmares, lost loved ones, or elusive treasures invade the mind.  To gaze through the barrier to the Beyond will take something from you. Stories and songs circulate through the taverns of people driven mad by the torments of what lies waiting in the darkness outside, knowing that they are a stone’s throw from the Vile Shadows that nearly eradicated humanity once before.

Though magic exists in Dominancy, the abundance of “natural gifts” among monsters are often mistaken for more occult abilities. Magic in a traditional sense is a mostly lost art at this point, with wild stories originating from old nomadic culture of the First Humans before the Human Flight.  In the same vein, what some may view as “spells” Heretics consider merely superstitions, rituals, potions, and good habits for keeping one’s self alive.  Quislings, however, once their pact with the Beast they serve is formed, these fanatics hone their magical abilities and marr themselves physically with the Weirding; their physique and abilities reflecting the Beast that “chose” them. Most humans are not Attuned nor familiar in ways of the Occult after the Night of Orphic Eradication.  Those who naturally fall even further into the study and practice of magic find themselves shunned by a more practical human society, and many become Heretics and flee to the relative isolation of the Untamed Woods or disappear into the inner sanctums of the Beasts.  Specific tomes no longer exist, but the Athenaeum officially documents these “abilities” as “The Weirding Words and Hermetic Superstitions,” though many humans simply refer to it as The Weirding.

The packet color for the Weirding Ways and Hermetic Superstitions is purple.

Players may either start as a Quisling or a Heretic. While Heretics can become Quislings, this is a difficult process, especially when removed from the gifts of the Beasts in the Fracture. The path from Quisling to Heretic is nigh impossible. If a player decides to start as a Quisling, they must pick a Beast to be their handler. Their makeup requirement stems from this selection, and must be visible.

Quislings must bear an outer marking from their Beast, which must be phys-repped at all times.  The marking must exemplify the Beast that the pact was made with, and must be detailed in the Character Background.  It does not have to be visible at all times, but should be of a decent size, and is subject to Plot review. Ritualistic scarring, body modifications, or visible tattoos are all appropriate for this. This requirement cannot be filled by taking a spell from The Weirding Words and Hermetic Superstitions with a makeup requirement, but can be of a similar notion.

Heretics do not have Makeup Requirements.

While technology does exist, Steampunk itemized fashion would be more appropriate in a different world setting.  Muted colours and flourished patterns of the Victorian and Edwardian area are the fashion style, even for the working underclass, though obviously at a much less ornate rate.  Garments would contain any number of layers, buttons, ruffles, and textures.  It is said by the elite that a human’s station and profession could be determined merely by their cuff and collar adornments. However, it should be noted that the vast majority of underclass (nearly the entire human population) pay little credence to these ‘marks of rank’, preferring a more practical and subtle garb suited for not drawing attention to one’s self. Many a pompous merchant has found that their brash, opulent garb, coupled with dark alleyways and blind corners, often results in a forcible relocation of their money to a more enterprising businessperson.

As a mostly trade-driven class, humans from the Nightmare Dominancy are trained craftsmen. They are also taught from a young age to be aware of their surroundings, lest their surroundings catch them unaware. Should they be attacked, however, range is always a much better defense than melee against the creatures of the night.

1st level of Craft is 0 CP for Humans, however the first specialty chosen MUST be Alchemy, otherwise this skill’s cost is only reduced to 5 for level 1.

Quislings may purchase the the Weirding Words and Hermetic Superstitions at 5 CP for level one, but they MUST first purchase the spell associated with their handler.

If chosen as a fourth trait, Perception costs only 15 CP instead of 20. It still can not be bought past level one, however.