There are certain worlds that, for whatever reason, are not yet connected to the Fracture, but still send forth elements. In fact, scholars during the Modern Age have noted that as a world begins to ‘bleed’ more into the Fracture, the more likely it will become fully connected, and thus, doomed. The below are a few of those worlds.

Out of Play Note: The worlds below are not applicable for starting characters, however, a player may select one of them after completing a 6-game block as a full-time NPC. These worlds represent strange and exciting expansions to the game, and a character from them is bound to be unique.

In the cold expanse of endless space, a group of ships carry the final survivors of humankind to a pre-charted location: Paradise. Their journey spans generations, but recently, strange ghosts of ethereal blue have begun to appear, threatening the precious integrity of the hulls. 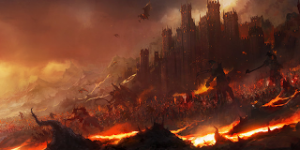 Amid seas of blood and roads paved with the bones of children, dark castles pierce a constantly burning sky. Hateworld was once a pinnacle of cooperation and peace, with a multitude of races working and living within their own kingdoms, guided by a wise Council of Men. Now there is only one king, the Hated King, who sits atop a throne of skulls, constantly searching for new lands to raze.

Deep beneath the surface of a lush green world, entire cities have been hewn from rocks and moss. These cities are populated by those seen as unfit for civilized life on the surface: criminals, mutants, the infirm, or just those who challenged the Order of the Sky. Aligning themselves with the subterranean race of Neliphan, these survivors settle a new world…or seek to return to the old one with a vengeance. 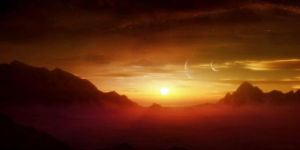 A WORLD OF FROST AND IRON

On a strange, coin shaped planetoid, two distinct civilizations live in nervous harmony. The children of the light, crafters of the finest metallurgy, trade their goods with the huntress-led tribes of the dusk, expert hunters and trackers. In the great city of Axis, a magical point where the two sides meet, the leaders of both worlds gather to discuss the strange incursions beginning to expand across the sky, and the glimpses of a dark world seen beyond them.