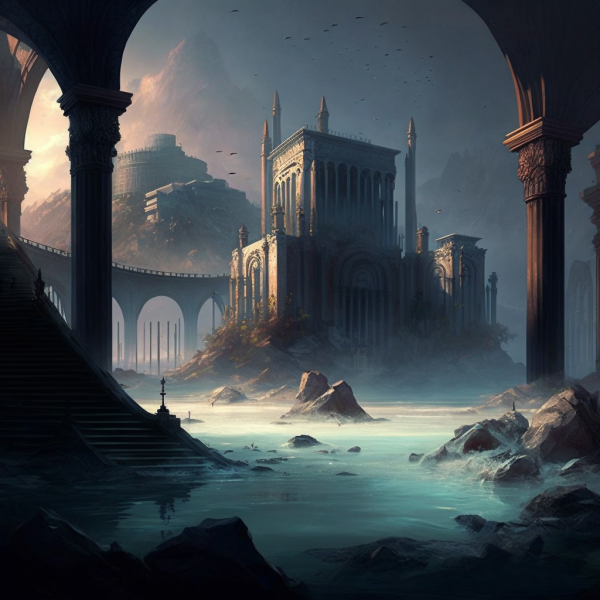 “Hearken to the tolling bell, for in their silence does madness dwell.”

A blue sun casts an ashen hue over the Giant’s Trail between the Peaks of Broken Divinity. Spanning up to 50 feet wide, the Giant’s Trail is mostly a ruin of a time long past. The only remaining section lies to the far south of what little land remains. Here a massive bridge connects a volcanic island back to the mainland of the continent, rebuilt from the fires of chaos into a great wonder of technomantic engineering. The Giant’s Trail continues on to the north through small villages and a great bone skull before crumbling into the desolate Badlands.

When the world was young, a massive explosion of fire, rock, and ash tore the continent to pieces and the people came together to see it saved. The ruins of Cartias (Car-tee-us) now stand as a bleak testament to a time when the continent was once whole. The lingering effects leave the land hostile, the air turning one mad, and nature vengeful. It was here that the Unseen first emerged, and with it came hordes of mutated Inferni, their presence casting a blight upon the world. Small hordes roam freely over the vast rocky terrain. Only by the chimes of bells or seasoned warriors that they may be slowed or vanquished.

History of the Peaks of Broken Divinity has been all but lost, carried on through myths and old journals passed down over the generations. The Consecrated keep to the faith of Divinitis and his saints, the saviors of the great sundering. The Abecedarians seek knowledge, science, and discovery fueled by their curiosity. The Striders roam the remote areas of the continent, still able to find the Giant’s Trail amongst the broken aqueducts, partially collapsed towers, and foundational footprints. All Asahmins converge and gather at the Bridge of Unity, welcome to all.

Not everyone ascribes to the conventional beliefs of faith and science. The Inquisition of Guiding Fire and the Seekers of Truth tend to have more extremist views. Within the Bridge of Unity, the Sentinels of Unbroken Unity and the Sisters of the Shield remain neutral. However, every Asahmin watches their back for a sign of the Bladedancers of Bronze: a black rose upon the corpse. But ultimately the Inferni are a constant threat and care for neither faith nor science.

When the world was rent asunder, the Asahmin climbed from the ashes bearing their white markings. The Consecrated will attribute it to the blessings of Divinitis, while the Abecedarians document it as evolution in the face of desolation, and the Striders will simply attest that it is just our connection to the world.

Players from the Peaks of Broken Divinity have white indecipherable arcane symbols on all exposed skin. This can be worn in patterns of symbols that are not part of an alphabet, nor offensive. The markings do not need to be symmetrical and must be all one color. These symbols are not a real language for the purposes of Gift of Tongues. Contacts or eyelashes may also be worn, as well as hair extensions, but are not required and do not meet this requirement by itself.

Asahmins are resourceful and scrape together their clothing as well as any mechanical device. Material possessions aren’t just thrown away, but recycled into new things. Clothing often has a handmade quality to it, with unique patterns, embroidery or patches, asymmetrical designs, and mixed materials. Pockets, belts, and hardy fabrics are widely used for Striders and Abecedarians, while those on the Bridge of Unity and the Isles of the Enclave favor inner pockets or parcels, lightweight garments, and simpler construction.

Names take their inspiration from Latin and Old English roots. Asahmins will often give themselves nicknames or shortened versions of their own amongst good company.

Asahmins from the Peaks of Broken Divinity come from a long line of great feats of engineering as evidenced by what little architecture remains. While some recreate the past and others pave the way towards the future, Asahmins receive a 5 CP discount on Tinkering. Coming together despite polarizing world views, Asahmins also receive a 5 CP discount on Diplomacy.  Asahmins who wish to be formally inducted into the faith may learn the Orisons of the Blessed Martyrs, an ability that costs 10 character points for characters from this setting instead of 15 character points as normal. Additionally, Asahmins are blessed or evolved with white markings on their flesh to survive in this new volcanic age, so they receive +1 Vitality.

Read More about the Peaks of Broken Divinity
Magic: TBA
Go to Top